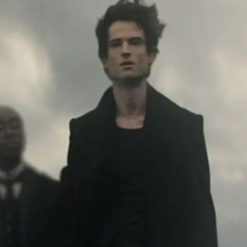 The recent fantasy and horror drama series “The Sandman” is currently a hot topic among all of his fans. And in a very short period of time, this series broke all records and received a 7.8 rating on IMDB. However, the following series make all his fans crazy in every aspect, including the storyline, strong cast, one of the great graphic works, and most important their jaw drops attires which are worn by different characters. Ramp Up Story Of Sandman

The Sandman is a legendary spiritual character that has its roots in European folklore. The power of his to sprinkle magic sand into people's eyes at night in order to induce sleep and bring about pleasant dreams. He is also, known as the dream.

1.Tom Sturridge: who plays the main role in this series in the role of Dream.

2.Richard Fleeshman: one of the most talented actors who portray the role of ken.

3.Boyd Holbrook: it doesn't matter what role he plays in movies, he always gives his best likewise he did in the role of Corinthian.

4.Mason Alexander Park: charming diva ever and recently appears in the mentioned series as a Desire.

5.Jenna Coleman: An English actress always rules the hearts of her fans, and this time she makes her fan crazier by her acting in the role of Johanna Constantine. If you are ready to burn all your foe with your hotter and classy looks this Dream The Sandman Long Coat was the Ideal option for you. Additionally, the advanced features of this coat will give you the tallest stature in the fashion era and make you stand out wherever you go. Not just men, but also women, want the standout jacket for their marvelous persona. Then, all you need is The Sandman 2022 Death Jacket which is seen in the sandman series and worn by charming diva “Kirby Howell” who plays the role of Baptiste. Although, if you want to replicate your looks Tasteful and attractive then put your hands on this jaw drop jacket. Looking for the tremendous and ideal casual look that will give a stand-out appearance and also, protect you in the winter. Then you need to kill 2 birds with one stone and add this Johanna Constantine The Sandman White Trench Coat to your wardrobe. Although, wool blends, soft viscose, and other advanced attributes of this coat are hitting the latest trend of fashion these days. Additionally, you can wear this coat flawlessly at every formal or casual party.

1.Is Sandman Marvel or DC?

Ans. Without any doubt The Sandman is a DC property however, many fans view it as an entirely separate entity. This is because The Sandman is part of DC's Vertigo imprint.

2. Why does The Sandman make you sleep?

Ans. Have you heard of the fabled figure known as The Sandman? According to legend, the Sandman scatters tiny grains over kids' eyes as they drift off to sleep. The children won't wake up until morning because the sand keeps their eyes from opening again.

3. What is The Sandman story?

Ans. The Sandman is a legendary spiritual character that has its roots in European folklore. He usually appears in children's fairy tales and is reputed to sprinkle magic sand into people's eyes at night in order to induce sleep and bring about pleasant dreams.

4. Why did Sandman go to jail?

Ans. Flint strikes his former coach, which leads to his dismissal from school and the start of his criminal career. He engages in more extensive and illegal activity, which makes him a violent and resentful person.

5. Is The Sandman the devil?

Ans. He is one of the most potent characters in the DC Universe and is modeled after Lucifer, the Biblical fallen angel and devil of Christianity.

Ans. The Sandman is a tale about stories and how Morpheus, the Lord of Dreams, comes to realize that change is occasionally unavoidable after being kidnapped.

7.What powers does Sandman have in DC?

Ans.  Destiny, Death, Destruction, Desire, Despair, and Delirium are other members of the family. The Endless are immortal and exist before almost all other types of life. They rank among the most potent characters in the DC Universe, particularly within their own realms.